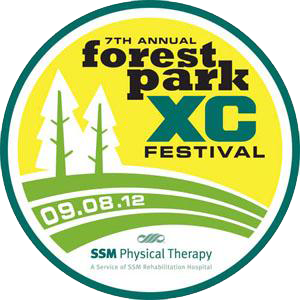 The seventh annual Forest Park Cross Country Festival was stacked. Perfect weather and course conditions combined with the deepest fields in the history of the event produced 20 of the fastest varsity 5K FPXC times ever. The Varsity girls green division race saw Ste. Genevieve freshman Taylor Werner overtake defending champion Hannah Long from Eureka by destroying the meet record with an elite time of 16:59! Three girls bested the course record that was previously held by Long

The boys individual race was a heavyweight battle between three former top finishers. Noah Kauppila of Marquette pulled it off on the homestretch over O’Fallon teammates Patrick Perrier and Alex Riba to win in 15:18, the third fastest time ever recorded at the meet.

A tight team battle was atop the girls varsity green between 4 time defending state champions Lee’s Summit West, Eureka and Rock Bridge as only 8 points separated them on the podium. There were no upsets here today as Lee’s Summit West was able to put it together with a 54 second split from 1-5 to win. Eureka held off Rock Bridge for 2nd place respectively.

There was no competition in the boys race as O’Fallon (IL) scored a meet record low (since the festival moved to two divisions) team score of 66 points putting 5 in the top 27 to take home the team title by 75 points over Rock Bridge.